Despite having defeated Western Australia comfortably by 4 goals (14-10) in their match the previous day, Victoria were not able to repeat the effort and fell to an inspired WA side in the final of the Indoor Lacrosse Championships.
In front of a packed house at Westgate Indoor Sports Centre, the Vic’s scored the first goal of the game and continued to create many chances without further reward in the early stages of the match. Western Australia on the other hand were making the most of limited opportunities and led after the first quarter 1-3. WA then produced a great second term to extend the lead to 1-6.
After half time the game began to change, Victoria got on a run and in a dominant third quarter added 3 goals to nil to turn for home at 4-6. Into the last quarter, the Vics continued to press and managed to get even at 6-6 and then at 7-7 with Eltham’s Tim Ratje playing an inspired game up forward. Western Australia managed to kick away again to a two goal lead with the Mackinnon brothers combining to bring Victoria back to within a goal with a nice pass from Campbell to Lachlan. In the dying seconds, Victoria continued to attack but just could not find the back of the net to take the game into overtime.
Western Australia held on for a deserved 9-8 win in one of the best Indoor finals seen in this country.
The four Altona Lacrosse Club boys (pictured Lachlan Mackinnon, Lachlan McDonald, Campbell Mackinnon and Tyson Black) in the Victorian side all did well and the club was very proud of their efforts. 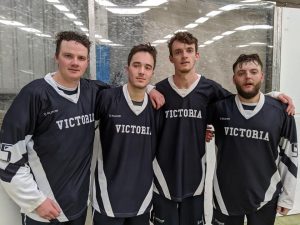